ROE V WADE: A RIPPLE OR A WAVE? 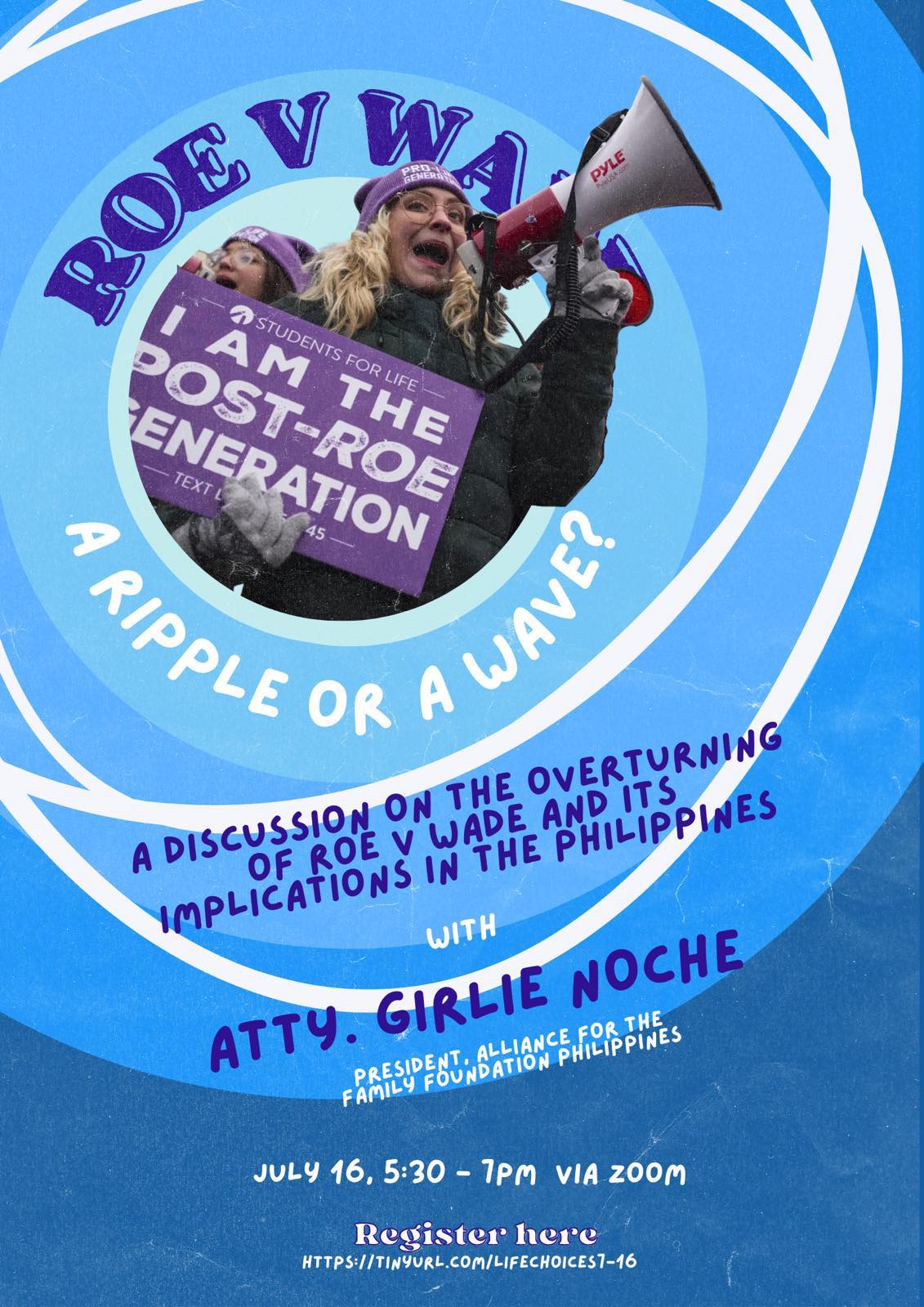 “A person is a person no matter how small.” —Dr. Seuss

In order to understand better the implications of the recent US Supreme Court decision on Dobbs v. Jackson Women’s Health Organization, the Alliance for the Family Foundation Philippines, Inc – Youth (ALFI Youth) hosted a web talk July 16. In “Roe V Wade: A Ripple or a Wave?”, the main speaker, ALFI’s President, Atty. Maria Concepcion “Girlie” Noche, discussed the factors that led to the historic overturning of Roe v. Wade and how it may affect other countries such as the Philippines. Atty. Noche is also the Dean of the Institute of Law at the University of Asia and the Pacific and an advocate of the right to life and protection of the sanctity of the family.

Roe v. Wade, and the subsequent case of Planned Parenthood v. Casey, essentially ruled that abortion is a constitutionally protected right, specifically, as part of a woman’s fundamental right to privacy. Thus, the State may only interfere if there is a compelling state interest to justify regulation. Atty. Noche stressed that the US Supreme Court’s decision on Roe may be attributed to a number of several external factors at that time, and not completely based on the applicable laws and the existing legal precedents. This led to polarizing discussions between the “pro-life” and “pro-choice” not just in the US but also in other countries.

However, less than 50 years later, the controversial Roe v. Wade was overturned by the US Supreme Court. Dobbs v. Jackson discussed how Roe erroneously upheld the right to an abortion as a constitutionally protected right since the US Constitution did not make any express reference to a right to obtain an abortion. The Court went as far as calling the ruling in Roe and Casey “egregiously wrong” since it had no legal ground nor was it deeply rooted in American history.

Atty. Noche clarified that we cannot say that abortion is now illegal in the United States. She noted that the ruling in Dobbs only upheld that the right to an abortion is not a federally protected right. Abortion still remains legal in the US but the authority to regulate abortion is returned to the people and their elected representatives.

To illustrate, she cited the case of Imbong, ALFI, et. al. vs. Ochoa regarding the constitutionality of the Reproductive Health Law. Atty Noche was one of the petitioners in this landmark case, representing ALFI, and was one of the counsels that presented their arguments in front of the Honorable Justices of the Supreme Court. One of the issues settled in the case of Imbong, ALFI, et. al. vs. Ochoa was the moment when life begins. The ponente resolved that life begins at conception: after considering the records of the Constitutional Convention, the Court upheld that the term “conception” refers to the moment of “fertilization” and not implantation.

Moreover, it is important to note that under Philippine laws, abortion is a crime and is sanctioned accordingly. This is regardless of the circumstances of the pregnancy for example through rape or incest. A wrong cannot be corrected by another wrong. The lone exception to this would be when it is medically impossible to save both the mother and the child, provided that it is unintentional and unavoidable.

Atty. Noche concluded her talk by pointing out that the Philippine Constitution’s categorical declaration into a constitutional right to life makes it impossible to read into the Constitution any reason or justification for allowing abortion as what happened in Roe v. Wade. However, it is also important to note that we must stay vigilant in the fight to protect life, from womb to tomb.

Fulfilling life
True to the quote at the beginning, a person is a person no matter the circumstances of one’s life. Any law that allows human beings the right to kill another is a crime and must be prohibited. But the fight to protect life merely begins with prohibition of abortion. Issues on reproductive health are affected by other societal factors. This means that we should also fight for better support to women and mothers. There are women who resort to abortion because they are overcome by fear and could think of no other option. Hence, we can help them by making sure that they are given ample support by the responsible institutions.

Finally, the right to life must be followed by a right to a fulfilling life. This means that we must endeavor to fight for a country that protects its people, especially its children while they are growing up. We must strive to aid the underprivileged so that they have access to the most basic rights. Hence, we need to call for policies that aim for better social service, equal access to education, and access to healthcare, among other things.