Five months after getting married, my husband and I found out that we were expecting.

The first trimester of pregnancy had been exhausting for me so I had to cut back on some of my activities and save my energy for growing the baby and doing my day job. I’ve been working from home for several years now, so it was manageable. But I couldn’t imagine how pregnant moms who had to commute to their work every day were able to do it. I read that the first trimester was the most critical time in pregnancy, so I made the decision to take extra care of my health.

I decided to temporarily stay away from Facebook, as I found social media time-consuming, mentally tiring, and sometimes even stressful. I also deactivated my beauty account on Instagram, as I suddenly lost interest in skincare and makeup when my pregnancy symptoms started manifesting. From doing the 10-step Korean skincare routine, I had to cut back to doing just the three basic steps, and eventually to doing just one step. I now literally just wash my face with water and whatever cleanser I get my hands on in the bathroom  I mean, when you feel like throwing up almost all the time, when suddenly you’re experiencing Gastroesophageal Reflux Disease (GERD) symptoms, then you wake up with a sty in your eye one day, and then the next week you have a super painful compressed nerve in your right arm, and you just feel so tired despite doing nothing… skincare would probably be the last thing on your mind, too.

Those of you who follow me on Instagram know that I hoard skincare and makeup, but now it’s been three months and I haven’t bought a single beauty product. All my money goes to food because I’m always hungry! 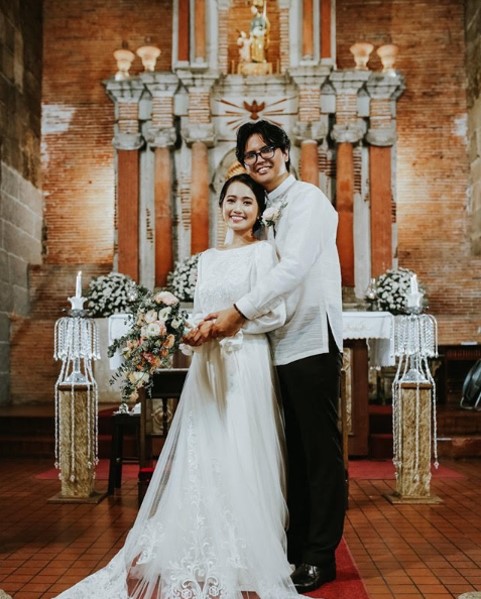 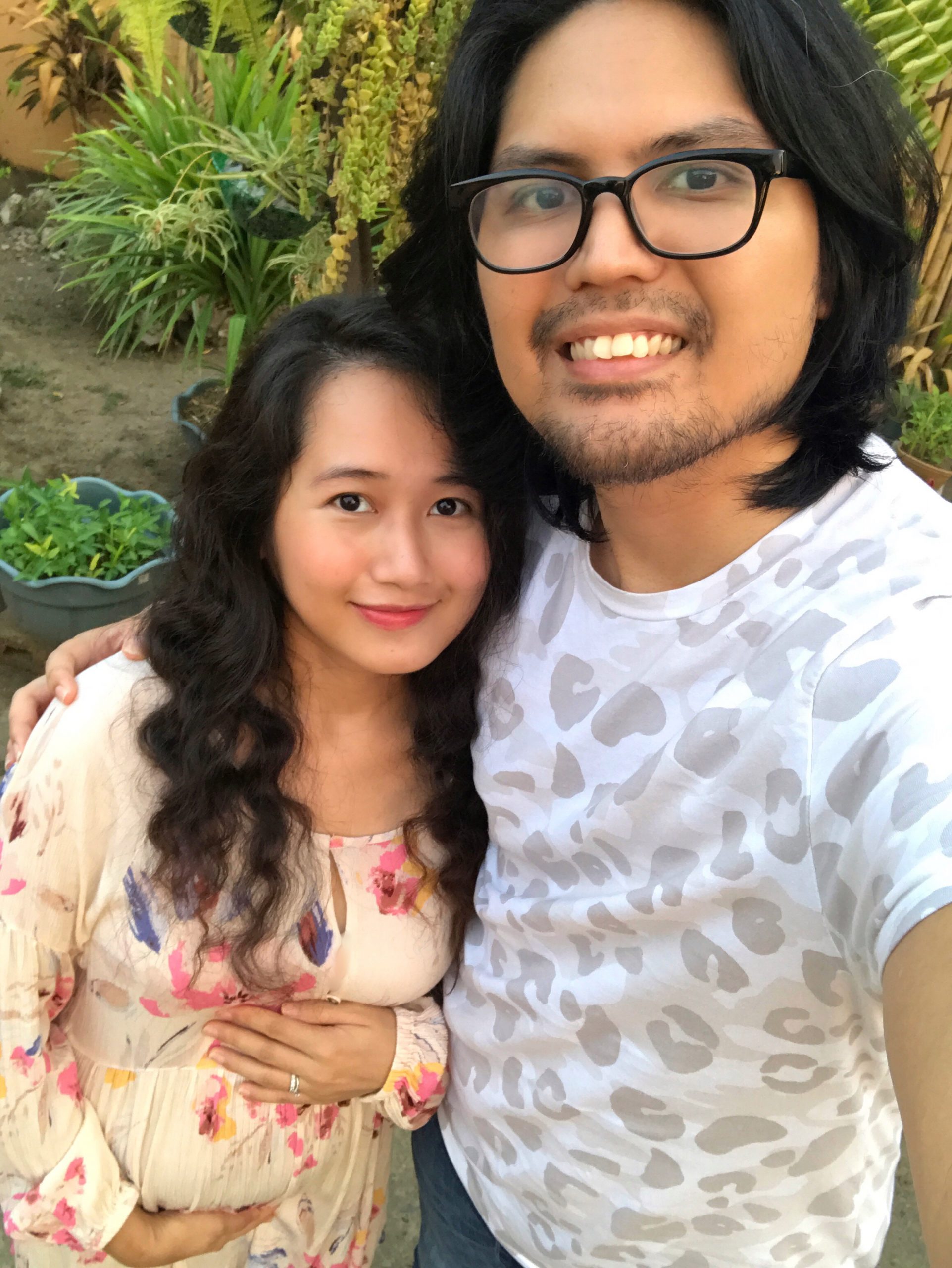 19 weeks pregnant. On ECQ at home but dressed up a bit for this photo.

I’m now on my 19th week of pregnancy (20 weeks tomorrow actually) and almost halfway through the second trimester and things have gotten better. In the first trimester, I couldn’t focus on the growing baby because I was preoccupied by the unpleasant pregnancy symptoms.

Now my nausea is almost gone and generally I just don’t feel as sick as before. I used to sleep sitting up due to my GERD symptoms but now I’m able to sleep lying down. This time I just have to deal with more frequent headaches, occasional leg cramps, round ligament pain, and also nasal congestion from time to time. I still feel tired in general, but less tired than before.

My aversion to certain scents has also eased. In the first trimester, I couldn’t stand the smell of lemon, mint/menthol, alcohol, disinfectant sprays, and anything from Bath & Body Works. Now I get to enjoy my food more, sleep better, and my skin looks great, too, despite doing only a single-step skincare “routine” (even my husband noticed!)

The baby’s movements have also gotten more intense this week (19th week). I started feeling them last week, but now they’re more frequent and pronounced. I get to feel some flutters and kicks, and in the wee hours of the night, I feel some somersaults, too. It feels like an active baby, which I’ve read is a good sign. While I’m fascinated by it all, I still get startled by the sudden movement sometimes.

To have something inside you that has a life of its own feels weird and magical at the same time. I think I’m just going to need more time to get used to it.

Nevertheless, this pregnancy has only strengthened my resolve to defend the life of the unborn.

Right from the start my husband and I knew it was life.

We found out I was pregnant at six weeks. We were super excited and were raring to announce it to family and friends. But I wanted to announce it with a sonogram so we waited to have an ultrasound first. However, in the ultrasound at 6 weeks, only the gestational sac was seen but the baby was nowhere to be found. My OB told me that sometimes they just show up late, but in some cases they don’t show up at all and that means a miscarriage (a blighted ovum). The thought of possibly losing my baby so early in pregnancy crushed me.

We had to put our celebration (and announcement) on hold And then after two weeks of waiting (and praying!) the baby finally showed up in the ultrasound at 8 weeks, and it had a strong heartbeat! Praise God! Of course it was human from the very start, but now that I can feel it kicking and turning, it has become even more real.

I just cannot fathom how in other countries their laws could allow abortion even up to birth! I mean, how could they kill someone who has been living, growing, drinking, peeing, yawning, sleeping, waking, and tumbling inside the womb? I mean, it’s quite astonishing that a “clump of cells” can do all that and more, isn’t it? I just can’t wrap my head around the thought. 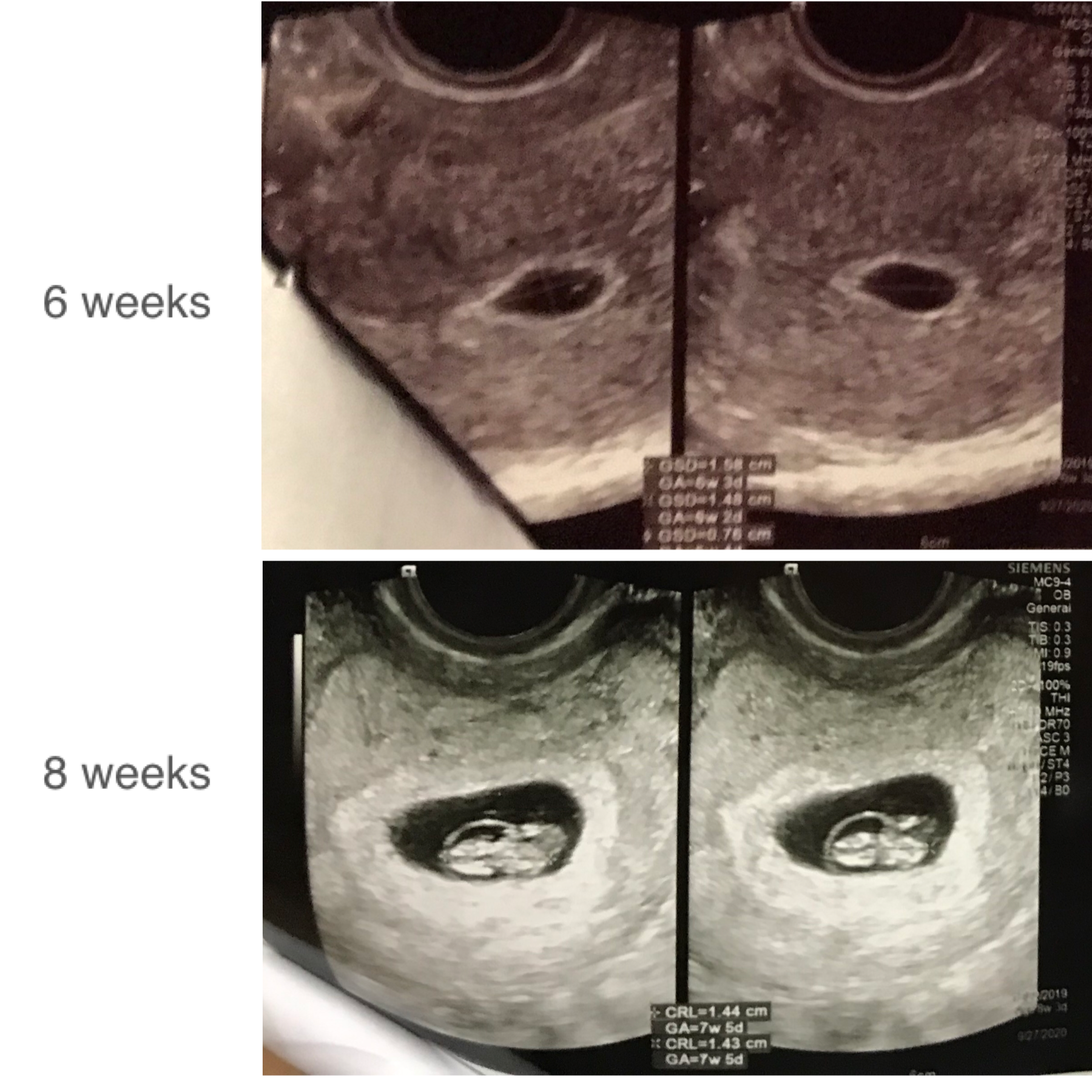 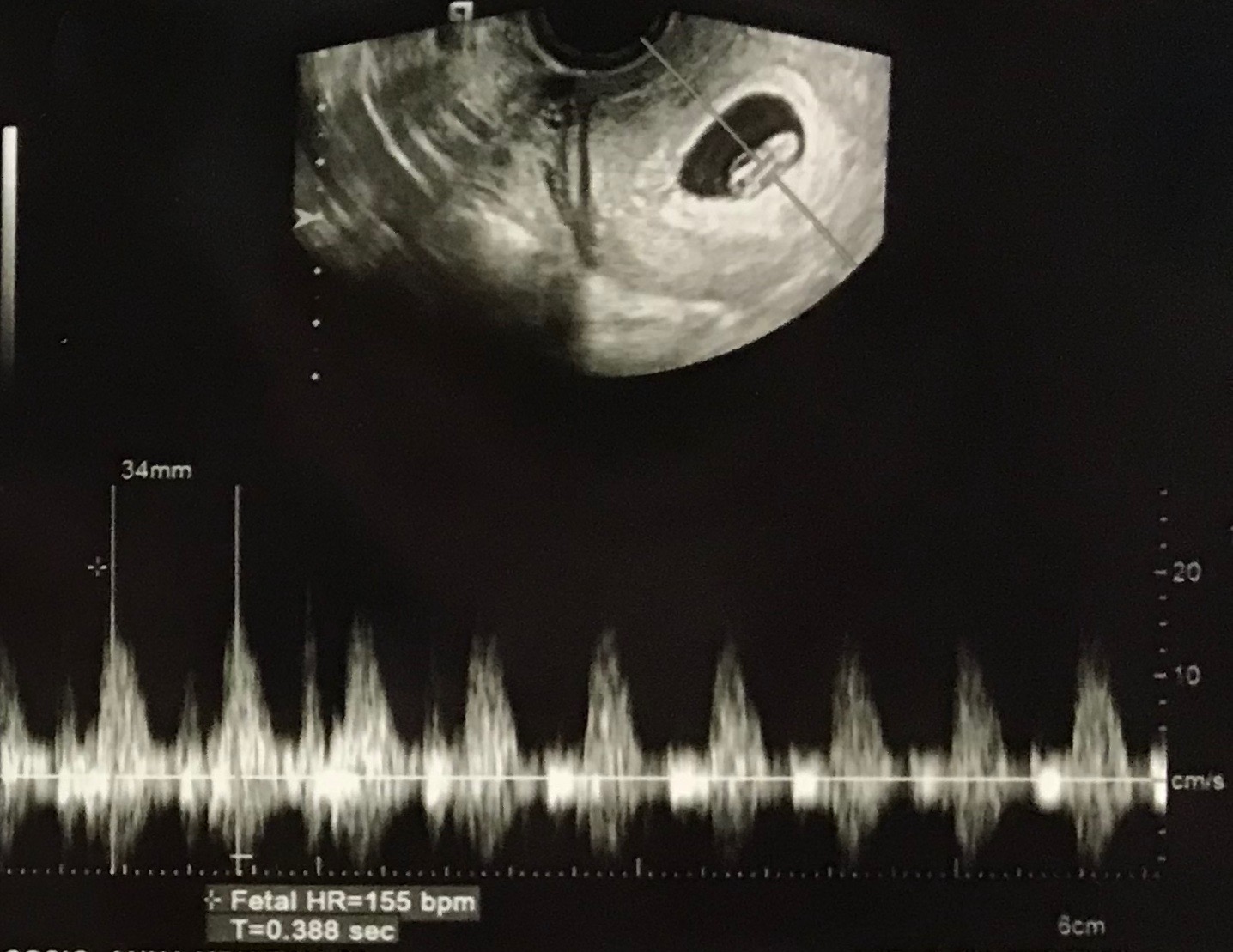 At 8 weeks, our little peanut had a strong heartbeat and a heart rate of 155 beats per minute.

Pregnancy is no walk in the park and I’m only nearly halfway through it.

I don’t know what exactly the third trimester has in store for me, since the pregnancy experience varies from one woman to another; some may have it better, some may have it worse, and we all have different tolerance levels for discomfort. And I don’t even want to think of childbirth right now (I’m a registered nurse but the thought of giving birth myself terrifies me. Ha-ha!)

I’m just so, so grateful for having a strong support system.

Every night (and even randomly throughout the day) I thank God for giving me a husband who is so sweet, reliable, patient, protective, and funny. He’s been at my beck and call during this pregnancy. He’s just lucky I didn’t have any mood swings (or did I? Maybe you should just ask him) I am thankful also for having very supportive family members and close friends. Special thanks to my mom who cooks everything that I want (I know! I’m so spoiled these days!). I’m also grateful that our Ninong OB-GYN Dr. Ryan Borja Capitulo has been so patient in answering all of our questions during this Enhanced Community Quarantine (ECQ) period: “Ninong Doc, is this normal? Is this medication safe for pregnancy? What should I do?” Salamat, Ninong Doc!

This is a unique time to be pregnant, so there are also unique challenges, such as avoiding getting infected by the coronavirus, finding good healthcare facilities in the area where we got locked down, dealing with cabin fever, etc. Despite all this, my husband and I try not to worry. We just take it one day at a time. We are comforted by the thought that this baby is a gift from God, so we know that He’s taking care of us. I also noticed that I have quite a few friends who are also pregnant right now (Yay!). Let us support and learn from each other. We can do this!

Thank you so much to everyone who has been praying for us, especially for the baby. Please continue to keep us in your prayers, for a healthy pregnancy and safe delivery.